Prisms of the People

Power and Organizing in Twenty-First-Century America 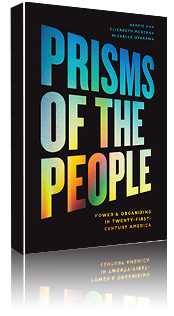 Published in 2021 from the University of Chicago Press, this book (co-authored by Hahrie Han, Elizabeth McKenna, and Michelle Oyakawa) examines outlying case studies of constituency-based organizations in America that were able to turn the engagement of their constituency base into political influence. The book examines commonalities in the organizational infrastructure these organizations built, arguing that these organizations acted like prisms, taking in white light and refracting it into power. The book unpacks the design choices at the heart of the prisms that made this transformative work possible, and develops a new set of measures to examine the kind of power these organizations built. The book won the 2022 Michael Harrington Book Award from the American Political Science Association.

Read blogposts and other writing about the book at The Monkey Cage of the Washington Post, the Stanford Social Innovation Review, Mobilizing Ideas, the Social Science Research Council (SSRC) blog, The Forge, and Markets, Power, and Culture.

Listen to podcasts on The Majority Report with Sam Seder, The Open Mind, Reasons to be Cheerful with Ed Milliband, Public Health On Call, Elevate Maryland, Everywhere Radio of Rural Assembly, and so on.

Join us on tour at one of our upcoming events.

Civic Associations and Leadership in the 21st Century 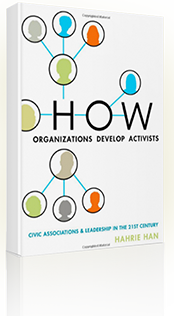 Why are some civic associations better than others at getting--and keeping--people involved in activism? From MoveOn.org to the National Rifle Association, Health Care for America Now to the Sierra Club, membership-based civic associations constantly seek to engage people in civic and political action. What makes some more effective than others?

Using in-person observations, surveys, and field experiments, this book compares organizations with strong records of engaging people in health and environmental politics to those with weaker records. To build power, civic associations need quality and quantity (or depth and breadth) of activism. They need lots of people to take action and also a cadre of leaders to develop and execute that activity. Yet, models for how to develop activists and leaders are not necessarily transparent. This book provides these models to help associations build the power they want and support a healthy democracy. In particular, the book examines organizing, mobilizing, and lone wolf models of engagement and shows how highly active associations blend mobilizing and organizing to transform their members' motivations and capacities for involvement.

This is not a simple story about the power of offline versus online organizing. Instead, it is a story about how associations can blend both online and offline strategies to build their activist base. In this compelling book, Hahrie Han explains how civic associations can invest in their members and build the capacity they need to inspire action.

Read reviews of the book at The Journal of Politics, American Journal of Sociology, Mobilizing Ideas, Social Forces, Mobilization, and Political Science Quarterly. 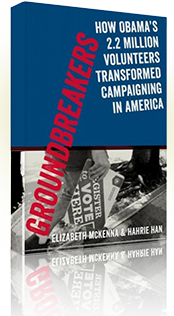 Much has been written about the historic nature of the Obama campaign. The multi-year, multi-billion dollar operation elected the nation's first black president, raised and spent more money than any other election effort in history, and built the most sophisticated voter targeting technology ever before used on a national campaign. What is missing from most accounts of the campaign is an understanding of how Obama for America recruited, motivated, developed, and managed its formidable army of 2.2 million volunteers. Unlike previous field campaigns that drew their power from staff, consultants, and paid canvassers, the Obama campaign's capacity came from unpaid local citizens who took responsibility for organizing their own neighborhoods months--and even years--in advance of election day. In so doing,Groundbreakers argues, the campaign engaged citizens in the work of practicing democracy. How did they organize so many volunteers to produce so much valuable work for the campaign? This book describes how.

Elizabeth McKenna and Hahrie Han argue that the legacy of Obama for America extends beyond big data and micro-targeting; it also reinvigorated and expanded traditional models of field campaigning.Groundbreakers makes the case that the Obama campaign altered traditional ground games by adopting the principles and practices of community organizing. Drawing on in-depth interviews with OFA field staff and volunteers, this book also argues that a key achievement of the OFA's field organizing was its transformative effect on those who were a part of it. Obama the candidate might have inspired volunteers to join the campaign, but it was the fulfilling relationships that volunteers had with other people--and their deep belief that their work mattered for the work of democracy--that kept them active.

Groundbreakers documents how the Obama campaign has inspired a new way of running field campaigns, with lessons for national and international political and civic movements.

Read a review of the book at Perspectives on Politics and The Boston Review. 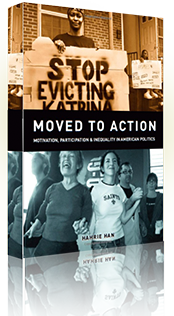 Wealthy, educated, and more privileged people are more likely to participate and be represented in politics than their poorer, less educated, and less privileged counterparts. To reduce these inequalities, we need a better understanding of how the disadvantaged become motivated to participate. Moved to Action fills the current gap in this area of research by examining the commitments and pathways through which the underprivileged become engaged in politics.

Drawing on original, in-depth interviews with political activists and large-scale survey data, author Hahrie C. Han contests the traditional idea that people must be politicized before they participate, and that only idiosyncratic factors outside the control of the political system can drive motivation. Her findings show that that highly personal commitments, such as the quality of children's education or the desire to help a friend, have a disproportionately large impact in motivating political participation among people with fewer resources. Han makes the case that civic and political organizations can lay the foundation for greater citizen participation by helping people recognize the connections between their personal commitments and politics.